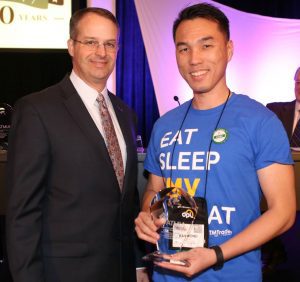 Last week was definitely a memorable week for NationalLink as we flew to Orlando, Florida to attend the annual ATM Industry Association (ATMIA) conference. 2017 is a special year because it marks the 50th year for the ATM industry and ATMIA’s 20th anniversary.

Behind the scenes, we’ve been working with industry leaders to start a pro cash initiative, Withdraw Cash Wednesday, and the initiative was presented to over 1,000 delegates in attendance at the conference. The initiative was welcomed with many supporters and new sponsors.

Along with nightly festivities and celebration, the ATM Industry Association (ATMIA) honored four individuals for outstanding service to the industry at its annual awards ceremony during the US conference that celebrated the association’s 20th anniversary last week in Orlando, which attracted over 1,000 delegates.